Located in the Mergui Archipelago in Myanmar, Boulder Island is one of the westernmost islands in the archipelago. Within these remote waters, lies a small island teeming with marine and terrestrial life. This island was the focus of Project Manaia survey during the 2016 season. With dozens of dives, days of criss-cross hiking and studies, a preliminary survey was accomplished. This survey accented the key species, vegetation, and marine life around Boulder Island. WIth knowledge and understanding of the current conditions, Boulder Island can now begin the process to push for a Marine No-Take Zone around the island. By understand the unique biodiversity on Boulder, further research can be expanded to a more extensive survey and to neighboring islands.

Boulder Island is 1.4km at the longest width and 650m at the middle with a 135 hectares or 334 acres of land. Dominated by boulders and vegetation, the easiest way to understand and study this is island is by hiking across it. Several permanent and semi-permanent hiking trails have been established on the island. However, it is always suggested to bring a local guide with you along on any hike.
There are two major and easily defined trails, Moken Bay Trail and Bamboo Bay Trail. These trails allow you to criss-cross the island easily and give access to Moken Bay and Bamboo Bay. Along the way you can experience the various vegetation types, terrain and landscape of Boulder Island.
These trails were utilized in the preliminary surveys on the island to understand the landscape, plants and bird species that might be living or visiting the island. Key bird viewing areas were discovered at Eagle Rock, with view of almost the entire island, as well as Bamboo Viewpoint and Boulder Viewpoint. Each of these viewpoints offer perfect morning and evening birdwatching opportunities. The section Terrestrial Life: Birds will cover in detail the bird species found on the island. 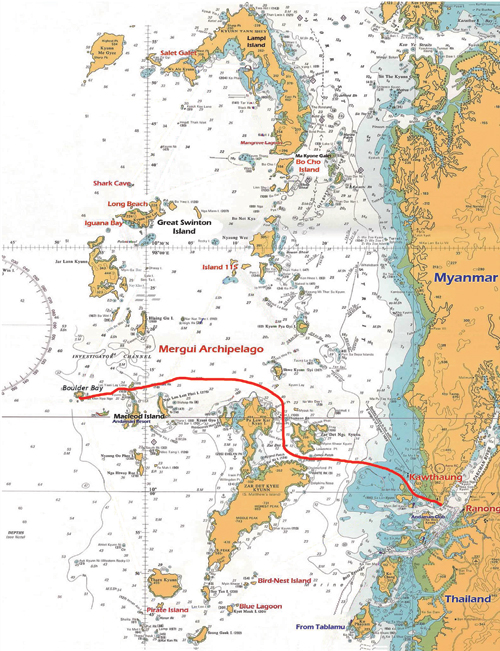 Boulder Island, as its name suggests, is covered mainly in large boulders. As one of the furthest islands west in the Archipelago, Boulder has a unique climate, water clarity and is even more remote than many other islands.
The edge of the island is lined with rocky coasts and large boulders, with Eagle Rock viewpoint offering the highest reachable point. The island has 2 freshwater sources: 1 is a catchment pond during the rainy season, while the other is a small spring. The source of freshwater allows a greater variety of animals and plants than other islands of the same or smaller size. The island also hosts a small mangrove and bamboo forest on the western side, both offer unique habitats for birds and reptiles alike. The eastern side is has a series of valleys of mix vegetation ending in large boulders and cliffs. This rugged terrain offers nesting areas for the White-Bellied Sea Eagle and Brahminy Kite, both which are widely seen across the island.
The island is covered in a variety of tropical jungle vegetation, including several unique plants. The Screw Pine, Pandamus odorastissimus, dominates the coastline of all bays. This species is easily identified by the large hard (non-edible) fruit that is visible. The island also have many, Cerebera odollam, commonly known as the Suicide Tree. The unique name is attributed to the seeds, which if eaten can cause cardiac arrest and death, though are perfectly harmless if not consumed. Other key vegetation is the Fishtail Palm, Caryota mitis and the Beach Hibiscus, Talipartiti tiliaceum. Many large trees of Barringtonia asiatica, or Fish Poison Tree are also found across the island. These are easily noticeable by the large (non-edible) hard pyramid shaped fruits. These fruits can be used to create a poison to stun or kill fish.

Boulder Island contains large variety of reef fishes ranging in across families and of all sizes. Being one of the western most islands, Boulder Island’s water quality and clarity remain throughout the dry season, offering some amazing snorkeling and habitat for marine life. Some of the prominent species around the island include Blue-Lined Surgeonfish, False Clown Anemonefish, and the Spot Fin Parrotfish.
Juvenile fishes seek shelter in the tidal zone as well as in broken coral along seabed. The large tidal difference provides quite large tidal zones, and though tempting to walk across during low tide, the reef top is a fragile unique ecosystem for juvenile fish, coral and crustaceans.

Coral life on Boulder is vibrant and recovering quickly from previous destruction and damage. Due to the remote nature of Boulder, the clarity and relatively un-trafficked bays, have allowed for a unique series of species of corals around Boulder. However, with over 400 coral species documented for the Indian Ocean alone, a full species list of corals is difficult and time consuming.
Boulder Bay and Sisters Bay have Heliopora coerulea, an IUCN-Vulnerable listed coral species. This species is particularly susceptible to coral bleaching due to its shallow distribution. Its wide distribution across Boulder help to confirm the need for further protection. Another key coral species surveyed at Boulder was Montipora tuberculosa, which represented over 50% of the coral in Moken Bay. Though listed as a IUCN-Least Concerned species, this coral still provides key habitats and indicators of the seas conditions.
Other coral species include Turbinaria patella, Ctenella chagius and various Acropora sp.

Several large communities of anemones are present around Boulder Island. The largest of the colonies was located on the eastern side of this island with a large group of Heteractis magnifica located on a large submerged boulder. This species was also prevalent in Sisters Bay and the other bays. While Entacmaea quadicolor was only observed in Boulder Bay.

A large variety of birds reside and visit Boulder Island. Located far west, the island could provide a rest for larger birds in migration patterns. Several prominent species were observed on the island, including the Nicobar Pigeon, Caloenas nicobarica. This species is listed at Near-Threatened in the IUCN RedList, and was previously unrecorded in any of the Mergui Archipelago islands. Interestingly the Nicobar Pigeon is the closest relative to the extinct Dodo.
Several other specie were also observed that were not yet marked as residents or migrants to the islands. The Pied Imperial Pigeon (Ducula bicolor) and the White-Rumped Shama, (Copsychus malabaricus) are prevalent across the entire island. While the White-Bellied Sea Eagle (Haliaeetus leucogaster), Brahminy Kite (Haliastur indus), Collared Kingfisher (Todiramphus chloris) and Pacific Reef Egret (Egretta sacrata) are the dominate marine birds and visible in all the bays.

Though a small islands, Boulder hosts two of the largest reptiles present in this region. The Malayan Water Monitor, (Varanus salvator) and the Reticulated Python, (Malayopython reticulatus.) Due to the small size and lack of larger prey, it is unique to see such large reptile species prevalent on this island. More prevalent is the smaller but beautiful Golden Tree Snake, (Chrysopelea ornata ornatissima), which can be see through the island and around the bungalows. Though it can grow up to 3m, it is not considered dangerous with only a mild venom if provoked. The island and the bungalows also has various species of Gecko, (Gekkota) though no specific species were identified. Geckos would appear to be the main diet of the two species of snakes.

Though Boulder Island has a supply of freshwater, the capacity of large mammals is limited. Only 2 species of mammals were observed on the island and were only briefly observed so an exact species could not be identified. The Flying Fox, (Pteropus Sp.) was observed around the bungalows and sharp rockfaces of the islands. Without close examination, the exact species could not be determined. The Jungle Rat, (Murinae sp.) was also observed near the bungalows and probably is included in the diet of the Python. However, this small rat could also be a non-native species of the island, arriving with cargo or other materials. Comparison with other islands and identification of the exact species could help refine the role and habitat of this rat.

The conservation and preservation on Boulder Island is a never ending task. With constantly new threats from overfishing, development and increased tourism, the whole Mergui Archipelago is at risk. Even with extensive surveys of Boulder Island, not all species are known and documented, additional marine and terrestrials surveys are required to fully assess Boulder Island.
Almost all of the other islands have not been surveyed and very little is known as to the marine and terrestrial species that live there. Basic surveys can help to show the importance and unique biodiversity that islands can provide. Island bio-geography and biodiversity are extremely unique and endemic species are more common on islands. Extensive surveys of the 800+ Mergui Archipelago islands, would provide a full understanding of the current biodiversity health and possible discovery of entirely new species.
Boulder Island is currently under consideration for the very first, Marine No-Take Zone. This would allow Boulder to become a safe haven from fishing, allow juvenile fish sanctuary, increase fish stocks, and protecting the already fragile reef structures. In becoming a Marine No-Take Zone, Boulder Island could provide an example to surrounding islands on a sustainable approach to conservation, protecting the very aspects that make these islands so unique and beautiful.

Unfortunately there are no accommodations at this location at the moment.

Unfortunately there are no tour offers at this location at the moment.

DAY ONE: KAWTHAUNG –BOULDER BAY ECO RESORT Upon being greeted by your guide at the airport In Kawtha More info
Book now

10 / 10
Our Island Safari’s start in the bustling fishing harbour of Kawthaung. The beautiful border town of More info
Book now

DAY ONE: KAWTHAUNG –BOULDER BAY ECO RESORT Upon being greeted by your guide at the airport In Kawtha More info
Book now